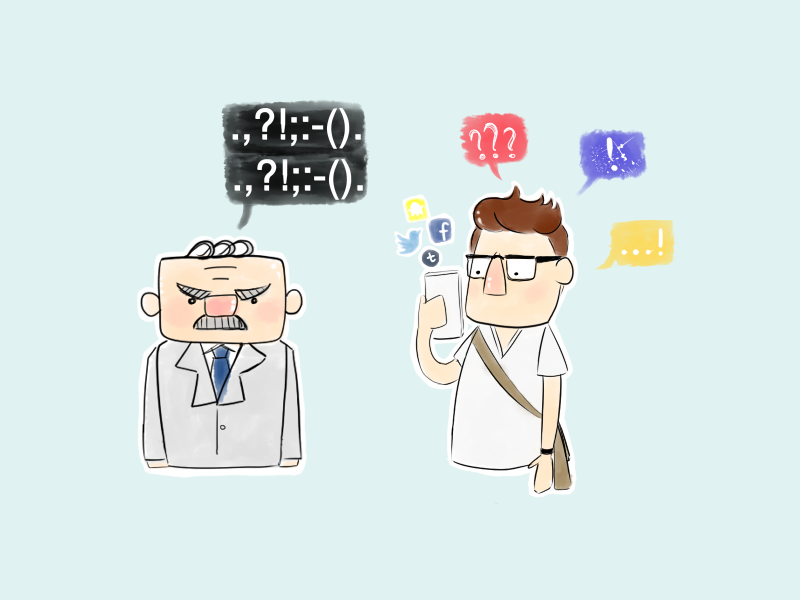 “A period goes at the end of every sentence.”
“Don’t overuse exclamation marks.”
“Don’t use a comma to separate two complete sentences.”
“Begin every sentence with a capital letter.”

If you’ve ever studied English in any sort of formal setting, such rules probably sound all too familiar. When it comes to standard written language, they remain important and relevant; after all, would you be able to take this article seriously had I forgotten to capitalize proper nouns or ended half the sentences with exclamation marks? In the world of (informal) electronic communication, however, punctuation conventions are rapidly changing and evolving (or devolving, depending on your perspective). What is considered correct and obligatory in formal writing might be seen as unnecessary or even pretentious in a more colloquial context. While much of what will be said here can be applied to any modern written language, this article will focus on English specifically due to its status as lingua franca of the 21st century and consequently, of the Internet.

There are two basic schools of thought in linguistics that can and should be referenced when discussing this issue. (Although prescriptivism and descriptivism are most often applied to grammar, they can be just as relevant to discussions of punctuation or of other elements of style.) The first of these, prescriptivism, holds that we should write and speak “properly” at all times — using “who” and “whom” correctly, for example, or separating two independent clauses with a semicolon. To the staunch prescriptivist, the relaxation of grammar and punctuation conventions that has come to characterize language use in the age of the Internet is indicative of the devolution or degeneration of English.

To the descriptivist, on the other hand, English is merely changing and has been since its inception — neither for the better nor for the worse. Descriptivism is the dominant camp in modern linguistics; its proponents maintain a focus on describing (as the name implies) how a language is actually spoken, written, and understood by those who use it. This should be done without value judgements (assuming that speakers of certain dialects are less intelligent than speakers of “standard” English, for example) or the establishment of normative rules such as those that define prescriptivism.

In theory, these two schools of thought exist independently of one another, but in practice, they often overlap. I, for one, understand and agree with descriptivist principles but still cannot help but cringe when I see the misuse of “your” and “you’re.” I also recognize that formal writing and discourse can follow a vastly different set of rules from informal electronic communication, and I adhere to diverse standards of usage based on my audience. This selective adherence to prescriptive rules is at the heart of understanding punctuation in the age of the Internet.

How is punctuation changing in the Digital Age?

The most obvious example of this is the full stop, or “period” in American English. According to linguist David Crystal, “in an instant message, it is pretty obvious a sentence has come to an end, and none will have a full stop. So why use it?” Its “conspicuous omission… in text messages and in instant messaging on social media,” he also argues, “is a product of the punctuation-free staccato sentences favoured by millennials — and increasingly their elders — a trend fuelled by the freewheeling style of Facebook, WhatsApp, and Twitter.” What’s more, according to Crystal, the seemingly-innocuous full stop can also be “deployed as a weapon to show irony, syntactic snark, insincerity, even aggression” — at least in casual communication. “The period now has an emotional charge and has become an emoticon of sorts,” he says. “In the 1990’s the Internet created an ethos of linguistic free love where breaking the rules was encouraged and punctuation was one of the ways this could be done.”

Almost as ubiquitous as the full stop is the comma, a symbol that should not technically be used to separate two independent clauses (sentences) as in the following example: I study linguistics, my specialty is syntax. When this does occur, it is known as a comma splice, and it is rapidly gaining acceptance in the Digital Age. Bryan A. Garner, considered the world’s top grammarian and a proud prescriptivist, has the following to say about this phenomenon: “More and more people are communicating with comma splices — perhaps in text messages and in email messages — and it could be that [they] will soon be somehow considered standard.” A comma splice can be fixed by replacing the comma with a semicolon (as in, I study linguistics; my specialty is syntax.), a punctuation mark whose lack of correct usage has angered many a grammarian. Much like the full stop, however, the semicolon used in casual exchanges has taken on charged connotations in recent years — namely, it can come across as pretentious or showy. In an attempt to avoid being labelled as such, I (and others with whom I have spoken) tend to use comma splices at least in text and instant messages despite knowing that they are prescriptively incorrect.

Comma splices and full stop elimination are only two among many examples of contemporary punctuation change. Others include a higher rate of exclamation marks (particularly of two or more in a row), the more relaxed use of apostrophes, and — although they are not technically punctuation — the myriad of emoticons, hashtags, and emoji that have come to define language use in the Digital Age. Like traditional punctuation marks, they too can be used to add nuance, feeling, and certain implications to a sentence; after all, the “face with tears of joy” emoji (?) was named the 2015 Word of the Year by Oxford Dictionaries, hailed — along with its many counterparts — as a “nuanced form of expression, and one that can cross linguistic barriers.”

Where do we go from here?

Once again, David Crystal has summed this all up aptly by stating that, “The big thing about language is that it always changes. Since the Internet came along, it has never moved so fast.” This change is inherently neither good nor bad, but it is inevitable, and punctuation in the Digital Age exemplifies it perfectly. According to “The Mysterious Origins of Punctuation,” written by Keith Houston of the BBC, the earliest readers and writers actually got by without it for thousands of years. Does technology guarantee an eventual return to that state? Only time will tell, but we are still using language to communicate creatively and effectively. And the beauty of language is that we will continue to do so, with or without current standard punctuation.

Raphel, A. (2015, December 10). A History of Punctuation for the Internet Age. The New Yorker, Retrieved from http://www.newyorker.com/books/page-turner/a-history-of-punctuation-for-the-internet-age

A dash of sophistication

Punctuation in the Age of the Internet

7 Responses to “Punctuation in the Digital Age”